View cart “Tarzan and the Green Goddess” has been added to your cart.

Condition Note: Condition: Fair to Good. Edge wear, scuffing throughout, some staining along borders, creasing in corners, tears on all borders with some missing paper in bottom left corner, some tape reinforcement on back, pinholes and corners sections, single-sided, stored flat

Settlers of the rapidly-growing frontier town of Vaquero, who bought their land at five dollars an acre from an irrigation company, are being victimized by Forsythe (Don Beddoe) and Chris Matson (William Pawley), who plan to resell grants at twenty-five dollars an acre. Leaders among the ranchers and settlers in opposition are Tom Garfield (Charles Starrett), his brother Frank (Bruce Bennett) and their ranch hands, the Sons of the Pioneers (Bob Nolan, Tim Spencer, Pat Brady, Hugh Farr, Karl Farr and Lloyd Perryman), who come to the aid of Bill Burnside (George Cleveland) and his daughter Judith (Marjorie Cooley.) FYI to source that thinks Bruce Kellogg played a deputy; that role was played by William Kellogg (billed as W. A. Kellogg.)

Also Featuring the Cast of West of Abilene 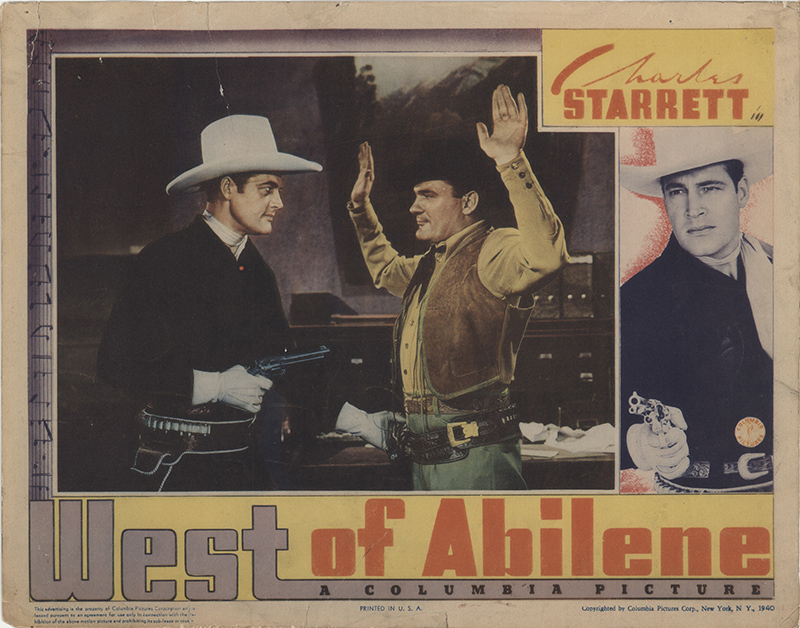